Moi, Je M’en Fous!!, which translated into English means “I don’t care”, is a range of three wines from Domaine Messenicolas in Karditsa in central mainland Greece. With edgy name and distinctive labels, you might think this is style over substance, but these wines have won numerous international awards and are definitely worth seeking out.

George Karamitros is the owner of the Greek winery Monsieur Nicolas, one of the most contemporary wineries in the prefecture of Karditsa. He makes a number of other wines including those from the grapes Muscat Hamburg (Muskat Trollinger) and Limnio. 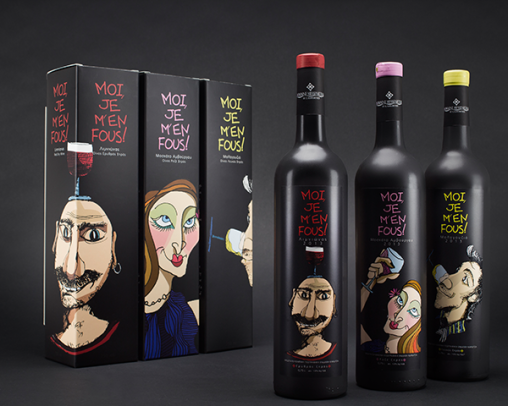 It is located in Messenicolas village of Plastiras municipality, only 22 km from Karditsa and just 3 km from Plastiras Lake. Chestnuts and oak trees giving color to the landscape, the “Sleeping Agrafa” (the legendary female figure, if you hang up little eyes, formed in Agrafa Mountains) casts the shadow of the valley, in the little villages that are perched in these arms of stone.

Being 5th generation winemakers, Karamitros family puts into practice significant experience inherited, from the cultivation of the vine to the vinification stage. The family owns 4 ha of vineyards, all located in Messenicolas, while their cooperation with the local producers adds 10 more ha to the range.

The winery is open for visitors to share the joy of winemaking process, and the family is always delighted to make the tour and offer some of their wines for tasting. As a visitor, one will have the chance to discover the secrets of wine ageing in the underground wine cellar, where wine rests in French oak barrels which are used up to three times.

The tanks are all modern, made of stainless steel with controlled fermentation temperatures. There are also nitrogen tanks and a contemporary bottling line. The annual production is 35,000 bottles, with Black Messenicolas being the main product.

This white wine is 100% “Malagousia”, which has deservedly won the title of the “queen” of Greek vineyards, when growing under the shadow of Agrafa, with the aura of Plastiras Lake dampening its roots, travels to another dimension.

Malagousia is an aromatic white variety grown primarily in Central Greece and Greek Macedonia. The variety was rescued from near extinction in 1983 by the winemaker Evangelos Gerovassiliou, after he planted out his vineyard at Epanomi, on the Halkidiki peninsula, with the variety.

Malagousia is best known for its citrus and peach characteristics, often showing various melon flavors on the palate. It is often used as a blending agent, most notably with Assyrtico, to which it adds middle body weight.

This wine stands out for its delightful, fresh and full flavour combined with a merry, cheerful mood. Its clarity and strong colour catches the eye; peach, lemon flowers, orange, jasmine and grapefruit release their aromas, while the taste buds enjoy a multi-dimensional and unforgettable taste. It is ideal for light dishes with seafood, poultry, pasta and salads.